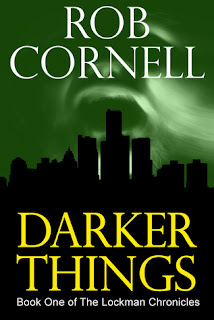 Darker Things (The Lockman Chronicles) by Rob Cornell is an action-packed urban fantasy thriller. It was not what I was expecting when I began reading it, but it was a good read. I saw that it had vampires in it and thought, Cool! However, this is not your sparkly, warm & cuddly, brooding, I-want-to-suck-your-blood vampire story.

Craig Lockman is the main character's alias. He's been retired from "The Agency," a secret, paranormal-battling government agency, and has been hiding for 15 years. Until one day, a young teenaged girl shows up on his doorstep. Not only does this girl know his real name, but she claims to be Lockman's daughter. Before Lockman can find out how she found him, a black-ops team of assassins attacks them. However, these aren’t ordinary killers — they’re heavily armed vampires sent by his most hated enemy. Lockman is forced to run with his daughter in tow. Now, he must protect her from an onslaught of horrors while searching for who betrayed him and why.

This story is chalked full of vampires, ghosts, werewolves, ogres, demons and some very sleazy humans. It's one breathless moment after another as Lockman attempts to save the world from a paranormal apocalypse which could cost him his soul.

I liked this story, but it wasn't what I thought it would be. That's on me because I didn't read up on what this story was all about. The categories for this book are Dark Fantasy, Horror, Science Fiction, & Superheroes.

The story kept my attention and read very fast. It is not a super deep, or super intellectual story, but it is a good ol' fashioned action-packed thriller. I look forward to reading the next book in the series, Dark Legion, soon.

Grab a copy and start reading!

Withdraw bitcoin from blockchain is the network who operates your digital coin i.e. cryptocurrency or bitcoin. So all your money that is present in blockchain wallet or account is considered as BLOCKCHAIN funds. Visit the given link for more.
Thank You

Are you tired of being human, having talented brain turning to a vampire in a good posture in ten minutes, Do you want to have power and influence over others, To be charming and desirable, To have wealth, health, without delaying in a good human posture and becoming an immortal? If yes, these your chance. It's a world of vampire where life get easier,We have made so many persons vampires and have turned them rich, You will assured long life and prosperity, You shall be made to be very sensitive to mental alertness, Stronger and also very fast, You will not be restricted to walking at night only even at the very middle of broad day light you will be made to walk, This is an opportunity to have the human vampire virus to perform in a good posture. If you are interested contact us on Vampirelord7878@gmail.com

Bitcoin to bank account 100% trusted platform where you can transfer you digital currency anytime anywhere. Do not waste your time just visit for more details

Our Expert Swimming pool contractors works with a client to design a pool and then arranges for the installation of the pool.
This contractor orders the materials and hires and supervises the subcontractors that actually install the pool.

Vampires is not at all like in the movies or books. Sure, I understand. You are young you have the whole world open to you. You can be anything that you choose if you apply yourself and try hard to work toward that goal. But being a Vampire is not what it seems like. It’s a life full of good, and amazing things. We are as human as you are.. It’s not what you are that counts, But how you choose to be. Do you want a life full of interesting things? Do you want to have power and influence over others? To be charming and desirable? To have wealth, health, and longevity? contact the Vampires Lord on his Email: Richvampirekindom@gmail.com

If you like vampire books...meet True Bradley! Have you found your True love?