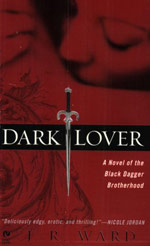 I have read many vampire series of late, enjoying every one of them in their own way. One day, I was about to read the next book in another series, when friends who follow me on Twitter insisted I read J.R. Ward’s “Black Dagger Brotherhood” series. On several occasions, whispers of this series came across my timeline but were ignored, simply because I had so many other books slated to read. One day, I finally broke down, bought the first six books of the series, and began to read.

Many series novels that I have read, take more than just the first book to hook you into the story. Not this series…no, this series sucked me in on the first book! Drama, fighting, friendships, and just all out romance sucked me right in and catapulted me into the next book.

The Black Dagger Brotherhood series, written by J.R. Ward, is about an ancient order of warrior vampires who defend and protect their race from vampire slayers known as lessers. These lessers are de-souled humans recruited by an evil supernatural being known as the Omega. There are six warriors in the Brotherhood who stand between the extinction of their vampire race and the Lessening Society.

Author, J.R. Ward, creates a different type of vampire in these novels. These vampires are a separate species from humans. In fact, to be a vampire you must be born carrying vampire DNA in your blood. Ms. Ward’s vampire race begin their lives as human and are unaware of what lies ahead of them until their mid-twenties when their bodies go through a dangerous. Surviving the transition, they must now drink the blood of vampires of the opposite sex in order to survive and stay strong.

This book, “Dark Lover,” centers on Wrath, the only pure blood vampire known to exist on the planet, and Beth, a half breed, half human-half vampire, who is on the verge of transition. Wrath is asked to help with Beth’s transition when her time comes by feeding her from his vein. Wrath hates humans, tries to live a loners life, never desiring a mate. However, when Wrath’s long-time friend and the father of Beth is killed by car bombing lessers, Wrath takes on the responsibility of protecting Beth and introducing her to her vampire heritage.

Throughout the book we see the beautiful choreography of all the warriors as they work together to battle their race’s nemesis and later find and free Beth from her captor.

If vampires are your thing, as they are mine, then this series is a must read! Do what I did, lay down that seventeenth book in the series you are currently reading and begin the Black Dagger Brotherhood series.

This series hooked me on the first book too! I fell in love with it...then read all the released novels and haven't yet found the time to go back to it...I need to (there are like 3-4 released books I haven't read). The series as a whole was quite amazing and J.R. Ward really knows how to hook you in.

J.R Ward is such an amazing writer. She totally hooks you in and with each book being based on another character you don't get sick of the main guy. Infact I have found I have fallen for each character with thier book, it's so hard to chose a favourite brother. I'd say Vishous, No... Zsadist, No.... Wrath.. Oh damn! I'll have all three please oh and Qhuinn. See what I mean? And Qhuinn hasn't even had his own book yet.. Lol
Glad you finally picked them up and loved them Hun, I did nag you enough about them. ;)

I'm totally addicted to this series. I've read quiet a lot vamp and werewolve books now, but this is one of the best. After reading a lot of book I think 'Okay, that was fun, but I don't have to read it again.' Not so with these. They are absolutely amazing. Each book contains a story about one of the brothers and each is totally different. In the 'Immortals after Dark' series the main point is 'How can I claim her'. From the first minute it's just about sex. Not so here. They want to make their partners happy and find a way to cope with the life as a brother.
Just absolutely stunning.
One of the few series I want to read again and again! :-)

Are you tired of being human, having talented brain turning to a vampire in a good posture in ten minutes, Do you want to have power and influence over others, To be charming and desirable, To have wealth, health, without delaying in a good human posture and becoming an immortal? If yes, these your chance. It's a world of vampire where life get easier,We have made so many persons vampires and have turned them rich, You will assured long life and prosperity, You shall be made to be very sensitive to mental alertness, Stronger and also very fast, You will not be restricted to walking at night only even at the very middle of broad day light you will be made to walk, This is an opportunity to have the human vampire virus to perform in a good posture. If you are interested contact us on Vampirelord7878@gmail.com