Some fun we missed in True Blood

This weekend I spent some time looking for little tidbits to add to my blog. Most of these little bits were found all over the internet so I didn't want to bore you with more of the same.

However, in going of this last season of the HBO series True Blood, I realized they missed and changed a lot of stuff from the book. Oh well, that's Hollywood right?

There is one particular scene that I wish they would have added... if only for the eye candy. It is the part in "Living Dead in Dallas," chapter 10 where Sookie has asked Eric to help her out with the whole sex party. Sookie has an idea to check it out for Lafayette's killer... But she needs someone to protector her so she asks Eric Northman.

Eric meets with Sookie, they talk and he then dramatically throws off his long trench coat to don his pink tank top and Lycra leggings. Of course, Sookie just can't take her eyes off of Eric at this point.


"Wow," I said, since it was all I could think of to say. "Wow. That's some outfit." When you've got a big guy wearing Lycra it doesn't leave a whole lot to the imagination. I resisted the temptation to ask Eric to turn around. -- Living Dead in Dallas, pg 247 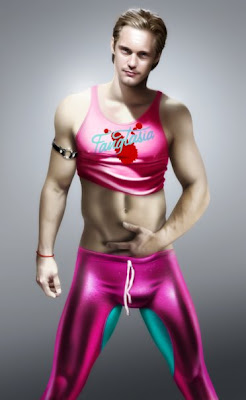 Now don't you wish that would have been in the show? Enjoy! Post me some luv too!

I didn't know you had a blog. Ok, I'm following. I am so going to post this picture on Monday. I can't think if I want to laugh at it or drool over a certain are of the cartoon. Hehehe

You know if this is photoshopped, then they could have added more to the pants... don't you think?